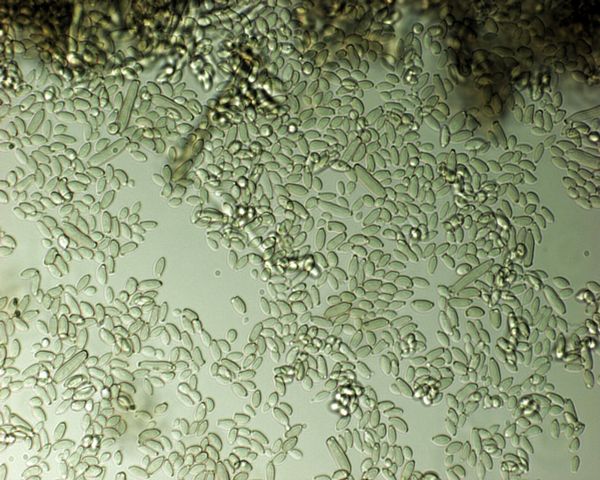 Ubiquitous;
cosmopolitan.
Approx. 28-40 species. One of the most common genera, worldwide.

Widespread, on many substrates, including textiles, wood, moist window sills. Grows at 0°C, and so is associated with refrigerated foods.
Aw=0.85-0.88 (minimum for various species).

C. herbarum produces enzymes which are used in the transformation of steroid intermediates such as pregnenolone and progesterone, biologically important hormones used in the industrial production of oral contraceptives.

Generally, non-pathogenic. One species, Cladosporium carrionii, is an agent of chromoblastomycosis in subtropical and tropical regions (grows at 35-37°C).

Cladosporin, emodin.
(Neither are highly toxic.)

Grows on all general fungal media. Some species sporulate better than others, and some may need cycles of light in order to produce spores.

Distinctive, with wide variation in size and shape. Spores with dark attachment scars and some olive to brown pigmentation are identified as Cladosporium.